I spent only three days in Bologna, the beautiful capital of the Emilia-Romagna region in Italy, but I gathered many memories and I am willing to share them all with you. When in the city, you can explore…

The hidden secrets of Bologna

Legend has it that there are 7 hidden secrets in the city of Bologna, and I found 4 of them:

Did you know Bologna has its own canals? Perhaps you didn’t, because they can only be seen from a tiny window that is camouflaged just like the wall that it stands on. How to find it? The small pinestrella is located on Via Piella, and the view that it guards is super cute.

Truth be told, there is another more “obvious” spot that unlocks the water view, but somehow stays unnoticed. You can find it on Via Guilermo Obedran, I know I did.

Bologna holds the record for the longest portico in the world – 3.8 km (that one goes from the city to the basilica Santuario di Madonna di San Luca). The porticoes are considered as outstanding universal value and are have been nominated as UNESCO World Heritage Site.
Enough with that useful trivia, please have a look at that one:

I met it on Via dell’Indipendenza and I confirm that you got it absolutely right even without noticing the dancing marijuana leaves : Cannabis Protectio. That is the Latin for cannabis is protection, and it stands right in the middle of Panis Vita and Vinum Laetitia. In conclusion, we have the following:
Bread is life // Cannabis is protection // Wine is happiness
As simple as that, isn’t it? 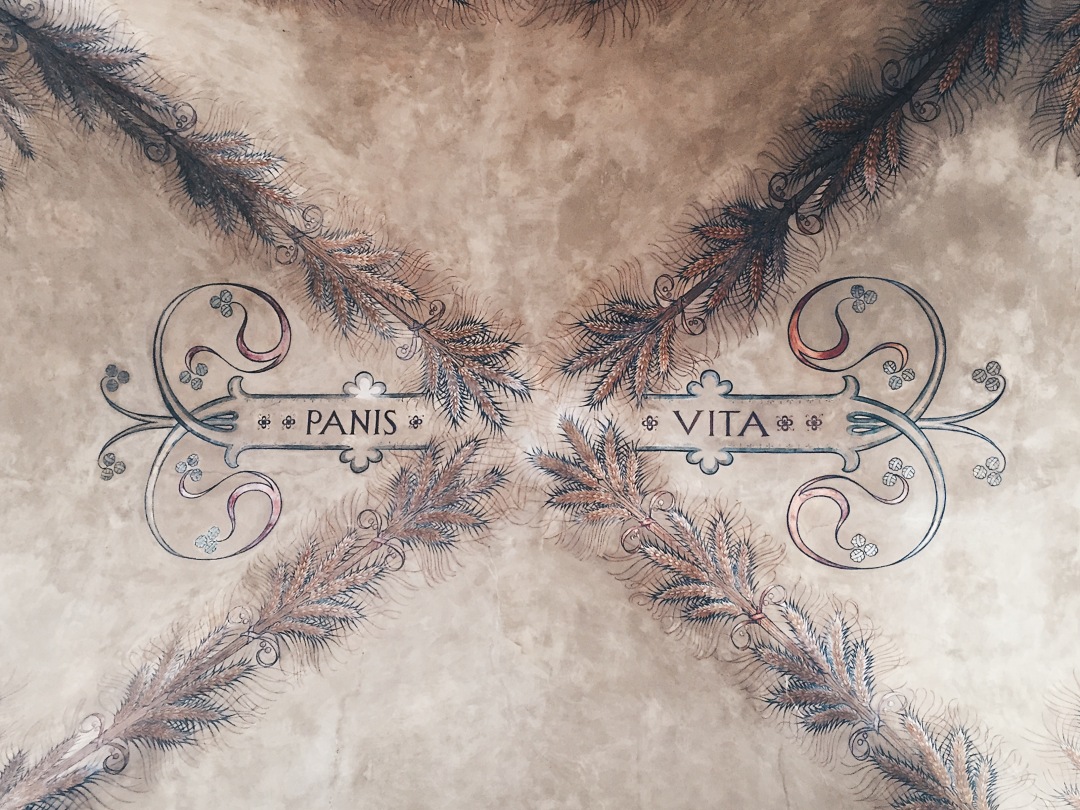 Lucio Dalla was an Italian pop/jazz singer and songwriter born in Bologna. He is pretty much considered as a musical legend in the city and his spirit never leaves it. If you wander around Via D’Azeglio, you might spot Lucio playing sax. Jazz. Hands. Now! 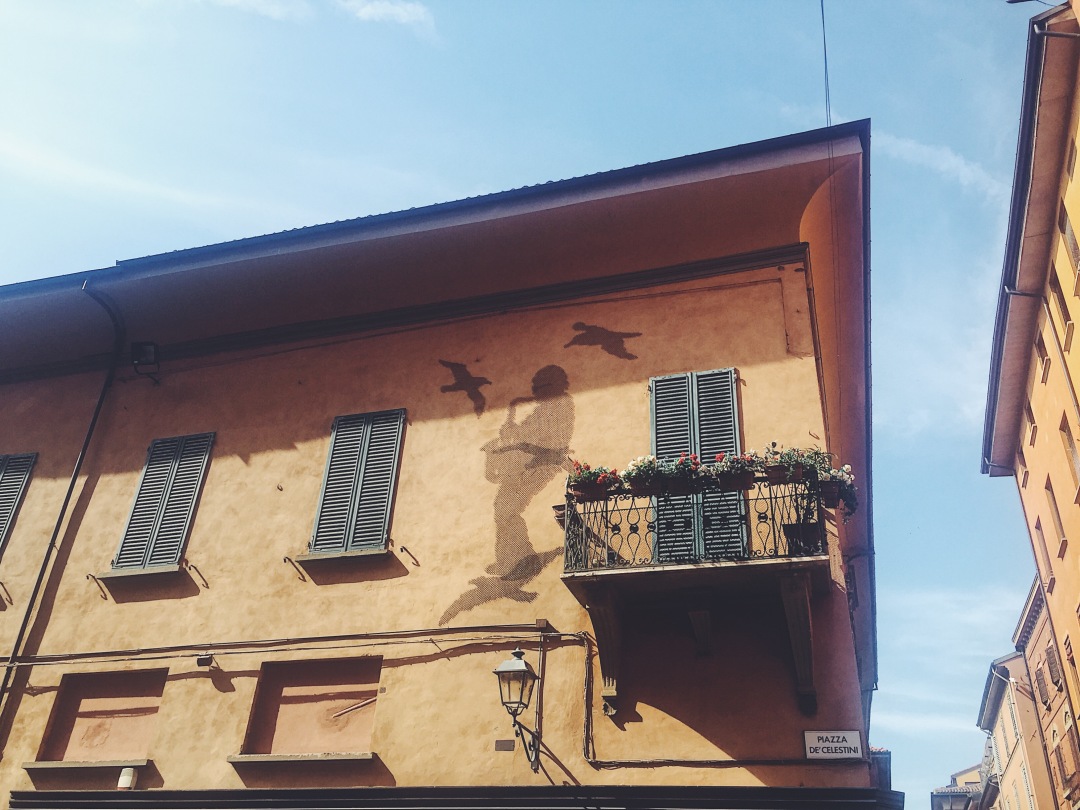 Today, Corte Isolani is a shopping gallery, but back in the days a rich lord used to live there. Rumour has it that his wife cheated on him and, in order to seek revenge, the lord sent three assassins to kill her. The wife was warned about the danger and thought of a clever plan: she appeared naked and the assassins were so distracted that they missed the target. And here is why you can see the arrows in the ceiling of the portico. 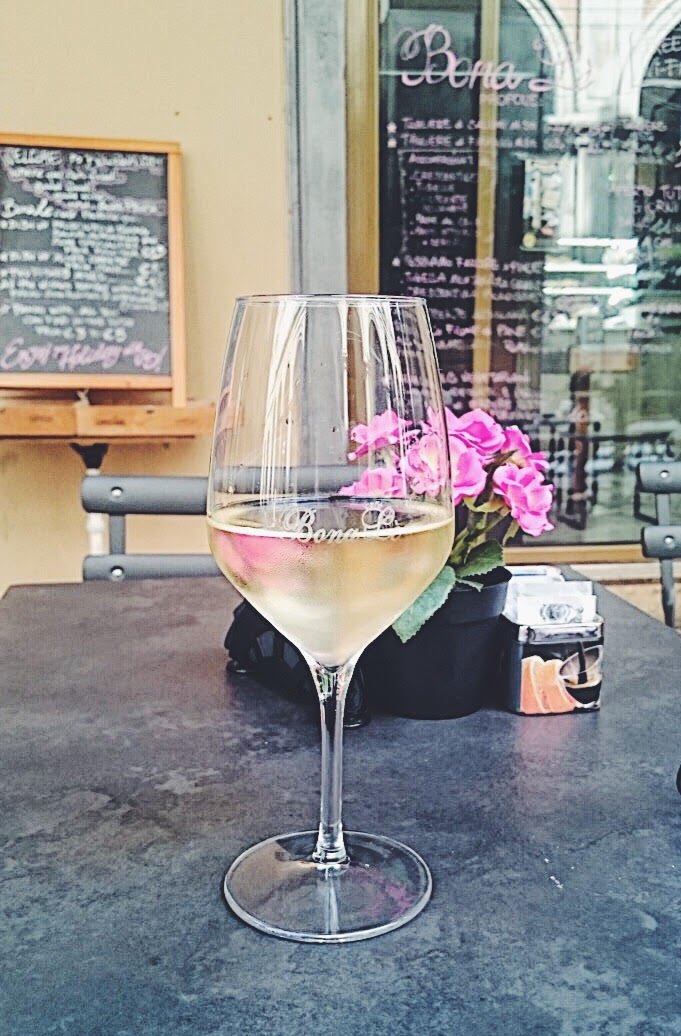 The majestic statue Fontana di Nettuno was built in 1567 by Flemish sculptor Giambologna. As you can imagine, in the 16th century people were modest and one always had to bear in mind that sex was prohibited. Here is why having nereids touching their breasts was okay, and so was pouring water from their nipples, but when it came to Nettuno and his dignity, the nuns were explicit: reduce, reduce, reduce. Giambologna was offended by that, and here is why he sculptured Neptune’s hand in such a way that, when seen from a certain angle (the one you obtain when standing in front of the Salaborsa library), the view suggests that the god is excited and ready to roll!

P.S. They were doing some restoration works and the fountain was hidden. You can not accuse me of any kind of debauchery.

>> A broken vase on top of the Asinelli Tower

No one knows how it got there, and almost no one can see it as there is no access to the top, but we all believe it must be there. 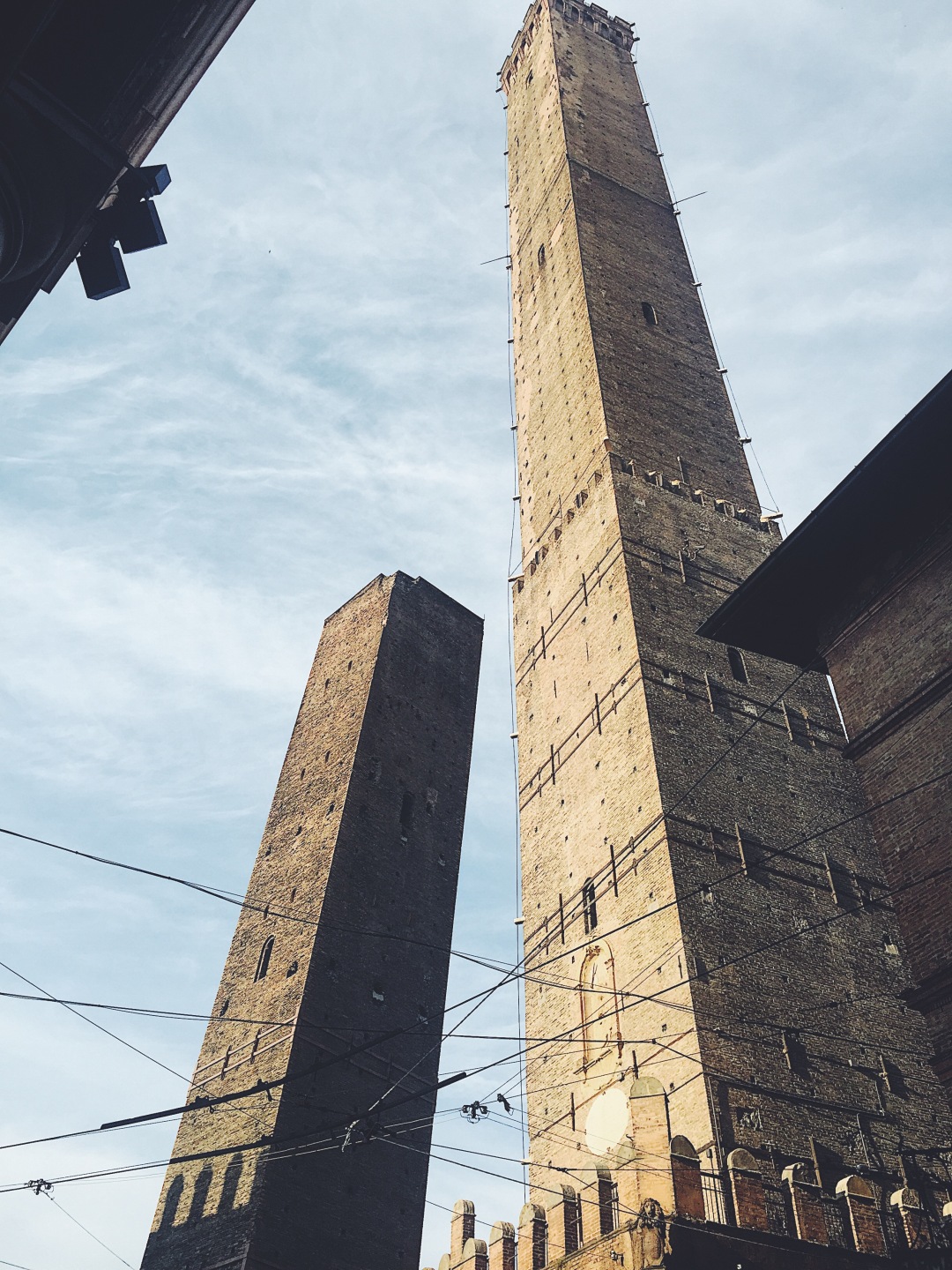 >> Careless whisper in the middle of Pazallo del Podestà

Here is how it works: you go under the archway in one of the corners, and a friend of yours goes under the diagonally opposite one. If one of you starts whispering, the other one will be able to hear everything! Pure magic or a super cool way for lepers to confess their sins during the middle ages? Your call.

Nathalie already served a full course meal with pasta, pizza and various cannoli. Remember: when in Italy, there is no such thing as too much dough.

A true Bolognese gal has cappuccino for breakfast and never in the afternoon. Finding the perfect spot where you can not only have a quick espresso shot at the bar, but also enjoy the local atmosphere, might take from 15 minutes to over an hour. In my case, it was somewhere in the middle. Coffee lover as I am, I spent enough minutes walking around the streets, looking like a bounty hunter on the next hot pursuit. For three days I had hot beverages in seven different locations, here are the ones that I definitely recommend to you:

>> Caffè Vittorio Emanuele, Piazza Maggiore 1
It has an open view to Piazza Maggiore, the central square in Bologna where you can also watch movies during the summer months – Sotto le stelle del cinema (Below the cinema stars). 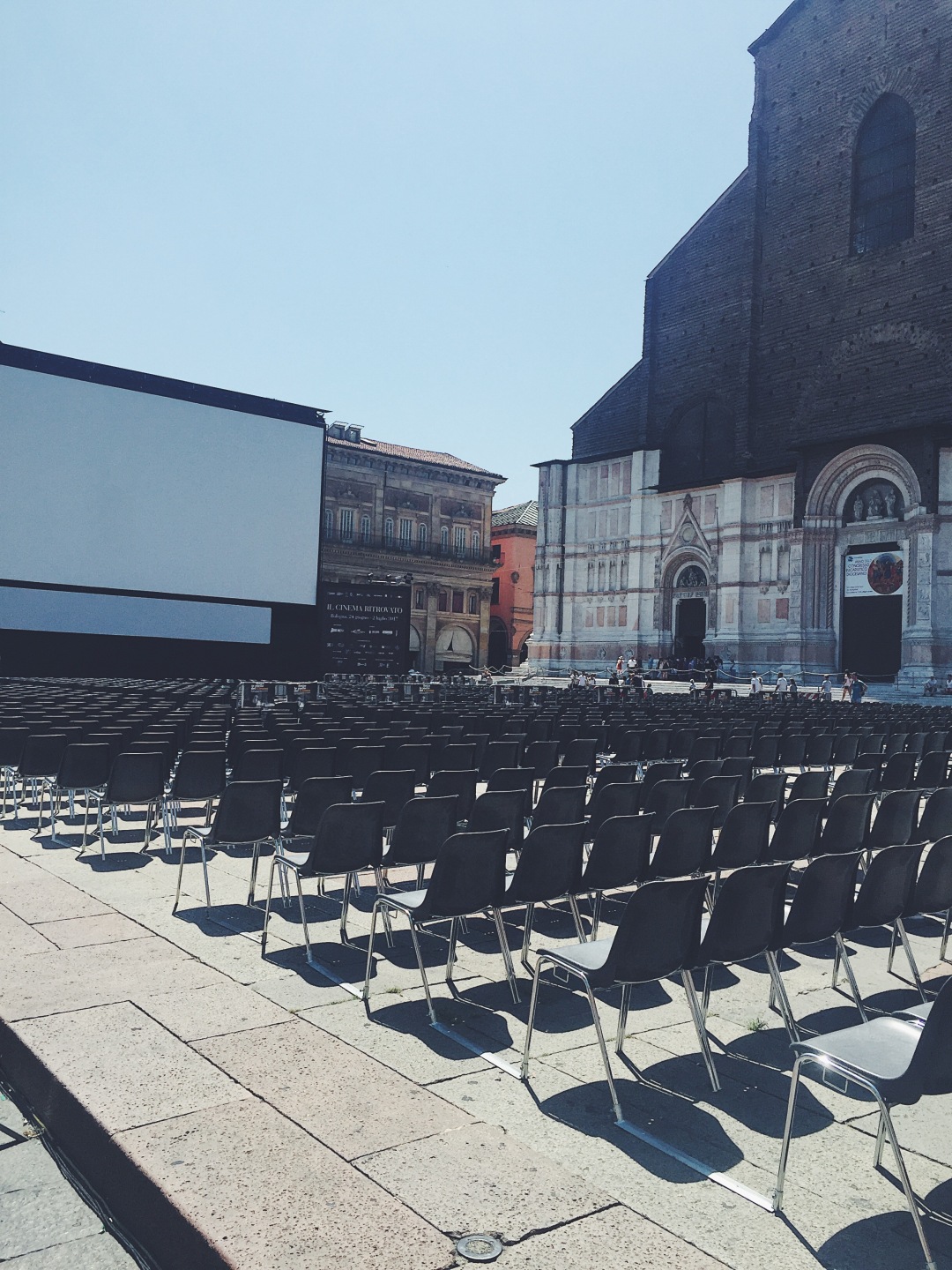 >> Naama Caffè, Via Oberdan 31/B
That one is famous for two things: the bright tiles on the walls and its pistacchio cheesecake. Yes, I had a slice, and yes, I will definitely have another one next time I’m visiting.

It is similar to what we know as happy hour with the difference that the happy part is not the fact that you get free shots or four cocktails for the price of one of them, but you indulge yourself in a whole concept. The main idea behind un aperitivo is to open your appetite – aperitivo orginates from the verb aperire which means to open in Latin. The classic aperitivo time is from 7 to 9 pm, and the most popular aperitivo drinks are the Spritz (Aperol/Campari, prosecco, sparkling water), the Negroni (gin, vermouth, Campari, orange peel) and the Americano (Campari, vermouth, sparkling water). Those are usually served with potato crisps or olives.

The perks of visiting Italy in July are called SALDI. Remember that word, my friends, as is the Italian equivalent of SALE. I found this useful website that lists the periods of the winter and summer sales in all the regions in Italy. Quick tip in case detailed geography is not one of your majors: Bologna is “hosted” by Emilia-Romagna.

What I bought from the saldi is a small colour block bag. Oh, and a grey dress with ruffled hemline, a striped top with knotted detail, a gorgeous pair of pink shorts and a notebook so that I could sketch the copy of this blog post.

La crème de la crème, or however that sounds in Italian. In Galleria Cavour you can meet Gucci, Saint Laurent Paris, Michael Kors, Miu Miu, Fendi, Prada, Tiffany & Co. and the blinking windows of Louis Vuitton. Please do not forget to wink back.

Bologna from a Bird’s eye view

There are several places that offer a bird’s eye view of the city, the hills that represent Bologna’s entourage being one of them. Another one are the rooftops, and now there is a third very tempting option.

The Basilica of San Petronio is the main church of Bologna. On the back of the building, you will spot an unstable-looking scaffolding. If you have a closer look, you will establish it is actually an elevator. Before you pay for your ticket, you have to fill in a piece of paper where you declare that you are completely aware of the chance to fall because of 1.) the slippery floor, 2.) wearing sandals. You also put a check in the box that proclaims you are responsible for your life during the visit in case something goes wrong with the elevator. “But that never happened”, as one of the guys assured me while I was staring at the paper. In case you might be wondering if you are, in fact, capable of being responsible for your life, you should also know that the profits from the admission fees (3 euro) are collected for a good cause. The elevator was actually built to help raising funds for some important reconstruction works. So the circle of life goes like that: you give [money] to the church, and the church gives you [permission to climb on its back and enjoy the panoramic terrace] back. 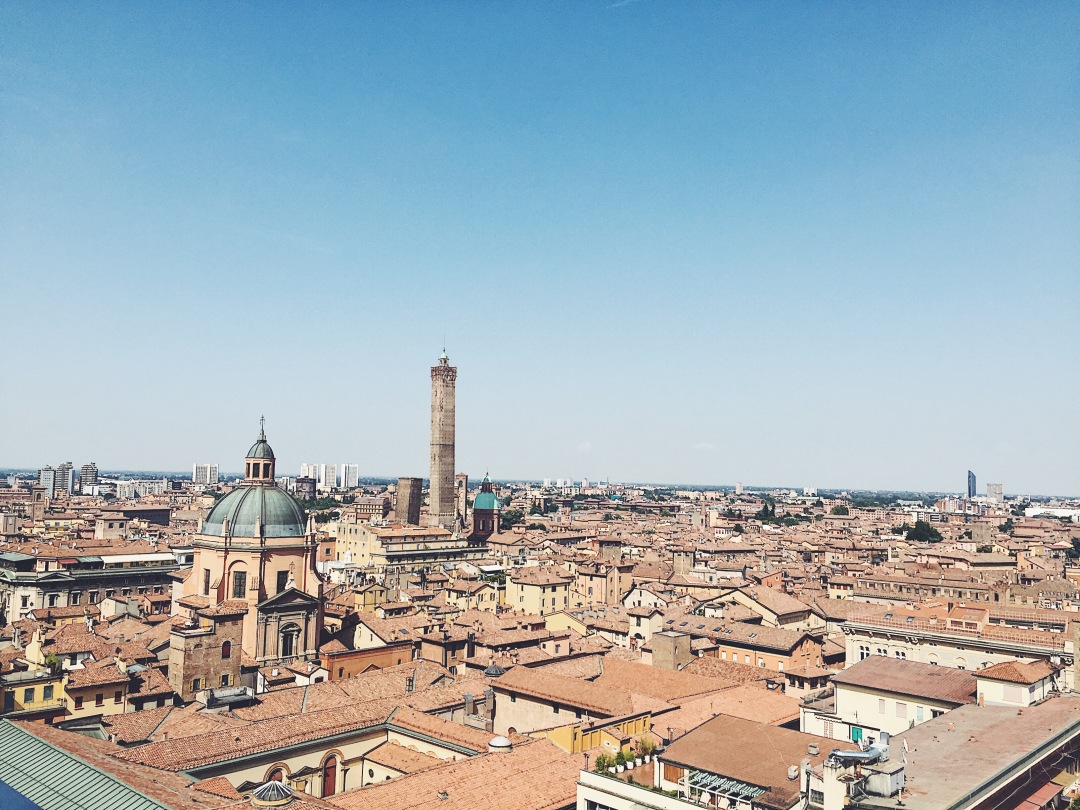 P.S. Even though I survived during the 54-metres ride with the elevator, I decided to take the stairs on the way back. I thought it was better to have as much control as possible over my own life, as checked on the entrance.

It is not the only library in the city, but it’s the one worth visiting the most. Apart from giving an excellent perspective towards Neptune’s fertility, as I mentioned above, the Salaborsa is the main public library of Bologna. The access is free, and so is borrowing materials – you just have to make a quick registration. The space is vividly arranged and comfy – just like these cool chairs designer for reading (that red thingy below the Baby Section).

They are everywhere, they are free, they are picturesque and, most importantly, they are the only place that can guarantee tranquillity AND sanctuary from the 40-something degrees that Bologna has to offer its visitors during the month of July.

I was not willing to take that kind of tour, I rarely am, but as I was shopping on Via dell’Indipendenza I got tired from the crowds, I took a turn on a random street, I heard a well-known melody and, before I know it, I already held an exhibition ticket in my hand. The well-known melody was A Hard Day’s Night, and the exhibition was Astrid Kirchherr with The Beatles. It is open until October, so you have plenty of time to check it out.

I hope you enjoyed the city tour with me. I promise I will be back to collect the missing parts of the puzzle. Until then: keep up the #wanderlust 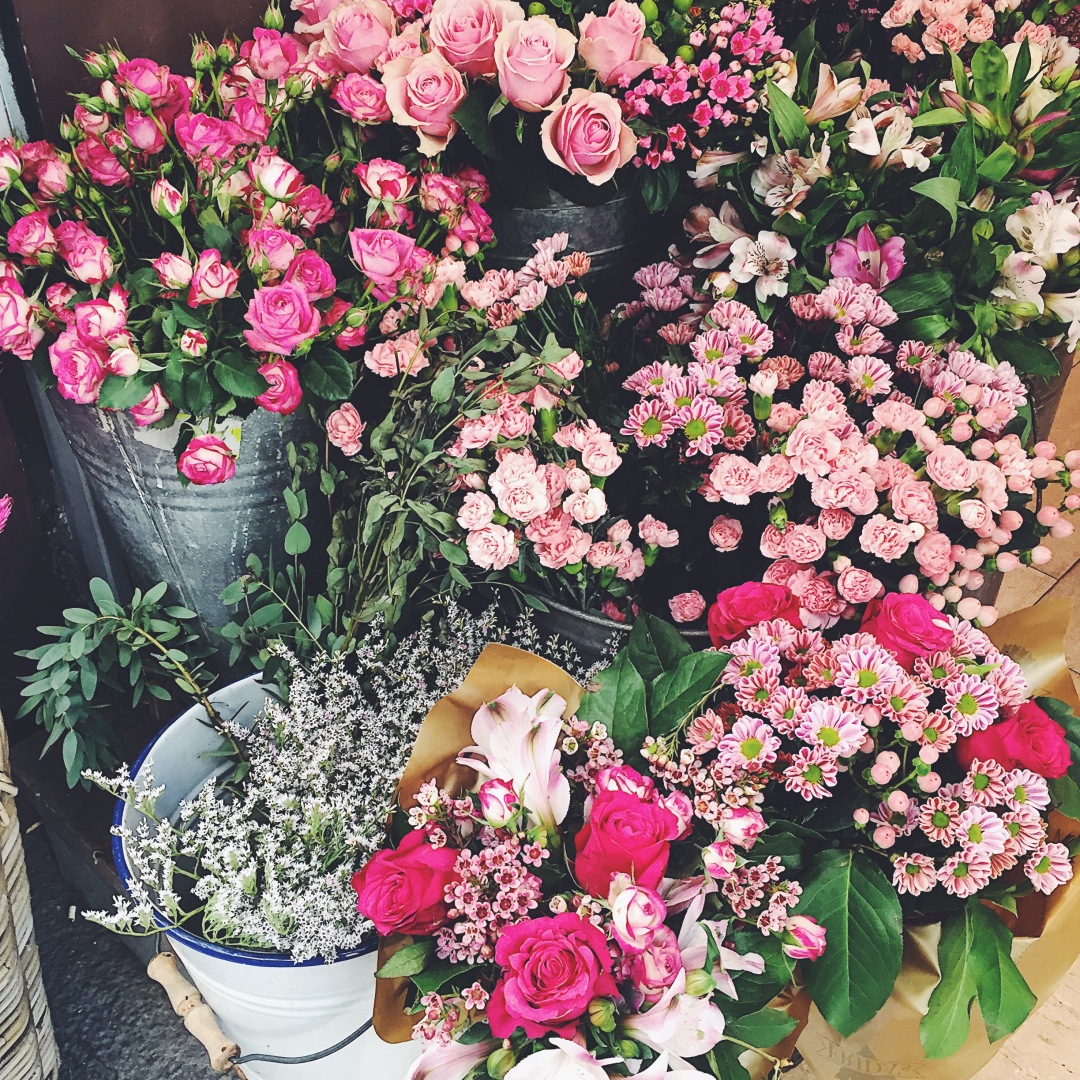 10 thoughts on “Top things to do in Bologna”

Looking for something particular?

Recent posts: what I’ve been fascinated by lately

ARCHIVES: what I wrote over the years